My Niece's Bag Slashed Inside the Jeepney

Oh gosh, I was shocked and angry when I her this news from my sister in law. It turned out the my niece's bag was slashed (AGAIN!!) inside the jeepney last Friday on her way home from the university. I was able to talk to my niece as well and asked her what happened.

She said it was around 8-8:30 pm on her way home from UP, she rode the jeepney Katipunan -Sta. Lucia route. She was seated between 2 guys and other passengers. For sure the criminal saw where she puts her wallet back after from paying. 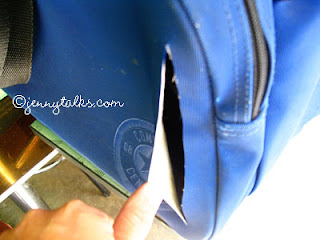 here's the 1st slash infront where she puts her wallet


She really has NO idea that her Converse bag was already slashed not until she got off the jeepney, boarded another jeepney and she was about to pay. Look at how awful that criminal did.! She looked at her wallet which she put in the front pocket, and there's none and she saw the big hole already.


Then saw another big hole in the bag which she never noticed. I told her she MUST have slept inside the jeepney that she didn't even noticed or felt that someone is already getting her stuff. She said she is fully awake and her hands where over her bag and books. 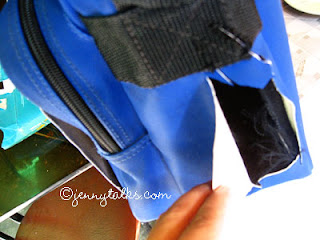 2nd big slash
I also assumed that people inside the jeepney must have seen the crime but too afraid to tell, of course because of fear. The guy in her left must have a very sharp knife that she opened the bag and he is quick enough to get the Wallet, make-up case and her pencil case !!! We are also thankful that it was not a holdup and that she was not threatened. 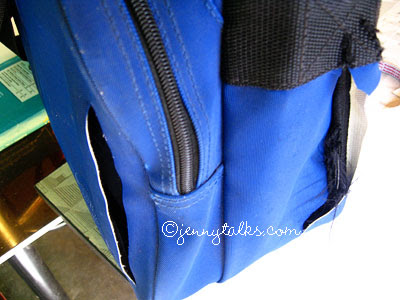 Snatchers and other criminals really have no pity over their victims, I only wish that someday they will get caught by authorities or if not they'll die and suffer. Sorry for cursing but they are scary and should not be allowed to be roaming and victimizing more.

So be careful everyone esp. those that commute, it's getting scary each day!
Posted by admin at 9:11 AM