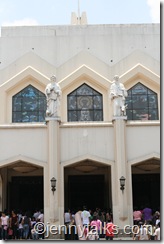 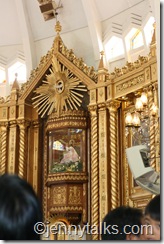 Antipolo Cathedral in Anitpolo City is the home of the our lady of the Blessed Virgin of Antipolo (Birhen ng Antipolo). The origin of the blessed Mother is said to date back during the to Spanish era here in the Philippines where there are galleon trade.

On March 25, 1626, Don Juan Niño de Tabora left the shores of Mexico aboard the galleon, El Almirante, to make its voyage to the Philippines. On this trip, Governor Tabora brought along the brown image of our Blessed Virgin Mother. For three months, the El Almirante safely braved the dangers of the stormy seas and a fire aboard the ship, arriving in the ports of Manila on July 18, 1626. Governor Tabora, realizing that the galleon's safe and successful journey was due to the presence of the image of the Blessed Virgin on board the ship, called for the pompous celebration of the image's arrival.

Amidst pageantry and fireworks, the religious procession started from the Church of San Ignacio, the Jesuit Church in Intramuros, up to the Manila Catholic Cathedral, which became the first house of the Blessed Virgin's image. It is said that because of the events surrounding the safe voyage of the El Almirante, the Blessed Virgin was named Nuestra Señora de la Paz y Buenviaje. 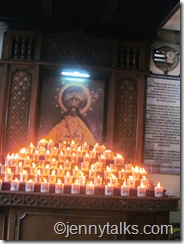 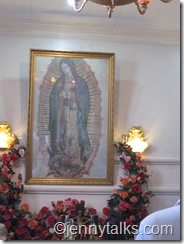 Now, I learned the reason why many have been going to Antipolo to have their cars or vehicles blessed for the Lady because of the story behind. I’m also sure that those travelling and going board on ships are praying for her guidance so they can avoid any maritime accident and for their safe voyage.
Posted by admin at 5:04 PM