So much has happened this past few days and I need to jot down all those events here:

1. The Royal Wedding: April 29th- We have witnessed the union of two hearts. Prince William and Princess Catherine (Kate) wed at the Westminster Abbey in London. Millions of people around the globe waited and watched their wedding which is also dubbed as The Wedding of the Century.

- To be honest, I was glued to the tube as early as 3pm (Phil. time) watching the pre-wedding special and the ceremony itself till about 8 or 9 pm. In fact, I even took some photos of the wedding on our TV screen.

2. Beatification of Pope John Paul II- May 1 – at Saint Peter's Square, Vatican City. Thousands of devotees flocked the Vatican to witness the beatification of blessed John Paul II and October 22 was even set as his feast day. One more miracle is needed before he can finally become a saint. 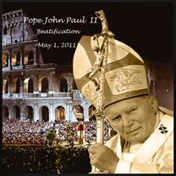 3. Death of Osama Bin Laden – May 2- A friend tweeted about this news and upon hearing it, I immediately opened the TV and found Pres. Obama speaking and telling about the news.