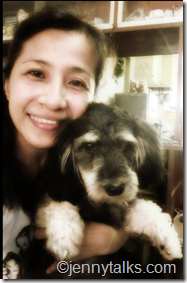 Meet my pet dog named Sophie. She is now 2 years and 7 months old and I considered her my daughter hehe. She’s a combination of Shihtzu  and Daschund  breed and has white and black fur combination. Actually, my brother is the real owner of Sophie but when they can no longer afford for her vaccinations, I took care of her. Now, she has a complete vaccination and that includes rabbies. Her next doctor’s appointment will be on September for her 6-in1 boost vaccine.

She barks most of the times esp. when she don’t know the person outside our garage but she’s adorable. She’s a good hunter, haha hunting for bugs or cockroaches when she’s left at the garage. She eats both dog food, rice and meat so I have no problem in trying to feed her. We usually play ball or with her little toys during playtime and sometimes we go for a walk in the morning or late afternoon. How’d I wish I was able to teach her many tricks because she only knows inside, up, down and no..lol

Once a year, I have her fur full trimmed to keep well groomed but from time to time I trimmed her fur. The only problem when I had her fur trimmed is that she became vulnerable to skin disease and just this year, she developed small lesions or I believe it was a mange near her neck so I had to buy an ointment to cure it. Fortunately, it dried up for few days due to medication. Now, with her fur all grown once again, I’m so sure that she’ll not get it again.

Oh well, just love her to bits and we’ll have another birthday party for her in January as she will  be turning 3 by then.
Posted by admin at 3:35 PM

Email ThisBlogThis!Share to TwitterShare to FacebookShare to Pinterest
Labels: Pets