We can still remember the day when my niece was heldup by 2 men on her way to her university. One early morning, my niece who was still sleepy because she slept late that night rode the MRT to go to school. She was alerted with a phone call from a classmate and later on she got off the MRT. Minutes later 2 men approached her and held her and asked for her cellphone with a knife pointing at her waist. Scared and still shocked she gave her new phone (Samsung Galaxy) which is still only about 1 month old and a P100 bill from her pocket.

She cried but no one helped. I guess the robbers saw her new phone when she received a call inside the MRT and that instance made her the target. She didn’t went to the police station and didn’t go to her class anymore for she’s too shocked on what happened. Anyway, she learned her lesson. Be more careful and alert while on public places.

Anyway, it was a shock also to her parents on what happened but of course they would not let their child not to have a cellphone again so they bought this new Samsung phone and gave it to her last Christmas. 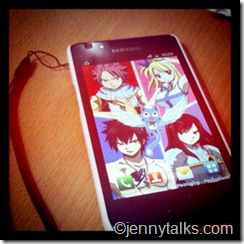 There are so many latest cell phones in the market today but she still prefers to own a Samsung. Now, with had happened to her last time, she is now more careful while texting on public places.
Posted by admin at 10:27 AM