I noticed that my dog, Sophie didn’t ate her lunch and dinner last Wednesday (June 20) and I wonder why. When I woke up on Thursday she acted differently for she’s not that active anymore. I sensed that something is wrong and I’m already worried.  Lunch time, she didn’t eat again so I decided that I will bring her to the vet because she looks weak.

I remember that last Tuesday night after the rain, she was barking non-stop in the garage and all along I thought she just saw a stranger outside the gate. When I looked, I saw that she’s barking and trying to bite a super big brown frog!!! I’m afraid of frogs so I yelled and told my sister to get it out of Sophie’s way. That incident led me to thinking that she was poisoned by that bull frog. Arghh.. 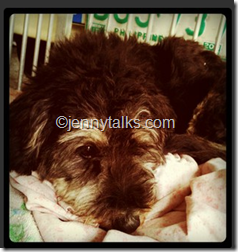 I Googled toad poisoning and I got scared when I learned that some frogs can kill dogs in just a matter of 15 mins. Some frogs are poisonous bec. they secret substance that can irritate or poison dogs.  Learning that, I hurriedly rushed Sophie at her vet and her doc said she’s indeed poisoned bec. she’s already weak, and has some foaming on her mouth yay!

The doctor immediately injected her some antidote for the toxin and also can help protect her liver. She’s also taking LIVEROLIN and multivtamins 2x a day for 7 days.

Thank God, I brought her to the vet early and that saved her from being dead. She’s still a bit weak yesterday but I patiently give her the medicines and made her eat so she will not be confined.

Look, last night she became active already and she wanted to go out already! 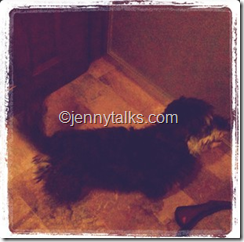 Today, she’s active already and eating. Even though her injections and medicines are expensive, I’m so happy that she recovered. Thank God! For those with dogs, if you see them running after a frog, get them immediately!