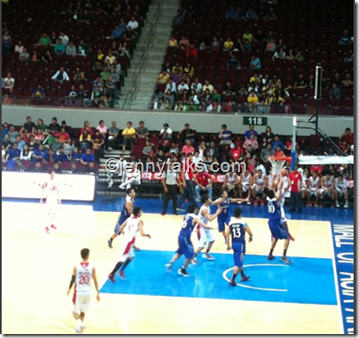 I was still in college back in the late 80’s when I had the chance to watch UAAP (University Athletic Association of the Philippines) games live. It’s not even the basketball game but women’s volleyball game.

Last July 6, 2012, I went to watch the 75th UAAP basketball game with my cousin and her son who is going to play for the UE Warriors soon. The game was held at MOA Arena and I have to say that the arena was beautiful, spacious and of international caliber. I could not believe that I'll be that excited to watch the game between UE vs Ateneo. The atmosphere inside was incredible. It was noisy because of the loud cheering from the crowd and respective cheering squads supporting each team.

Right now, I found myself watching UAAP game coverage on ABS-CBN Channel 2 and Studio 23 if I get the chance. Wonder what team will win this year?

Have you experienced watching UAAP games or PBA games inside an arena?
Posted by admin at 6:36 PM