Bicycle Safety: How to Avoid an Auto Accident 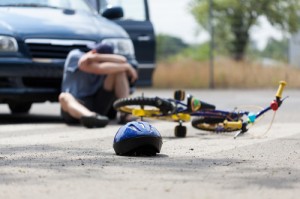 As the winter weather finally officially melts to spring, countless Americans look to the roads for a little fun and family fitness time with the help of their favorite two-wheeled accessories.
For many, thoughts of European-style bike getaways may flood the psyche. But unlike the calm and commonplace overseas fitness tradition, America simply doesn’t offer the same infrastructure. U.S. roads are built for cars and fast-paced traffic while pedestrians and bicyclists are often left in the dust. As such, America reports more bike and pedestrian-related accidents than any other country annually. In 2015 alone there were almost 500,000 bike injuries and over 1,000 fatalities, and most involved automobiles. The number of injuries has since declined, but the fatalities are rising. Fortunately, there are some simple tricks to help you and your loved ones avoid becoming a victim of a bicycle accident.

Stay In the Correct Lane
Whenever a clearly marked bike lane is present or available, always use that. In the event your city or riding location is among those that don’t currently prioritize such lifesaving measures, be sure to ride on the right side of traffic close to parked cars. Avoid riding on sidewalks if possible since that can interfere with pedestrian safety and other dangerous obstacles.

Learn and Obey Traffic Laws
If you’re riding on or near the road at any time, knowing and applying some basic road rules can help keep everyone safe. Detroit is among the safest cities in the nation for bicyclists with only 1.5 fatalities per 1 million people. However, the need for a Michigan bicycle accident attorney could arise at any time. To help avoid that, ride with the flow of traffic and always on the right-hand side of the street. Obey traffic signs, stop signs, traffic lights, and cross at a pedestrian crosswalk when one’s available. Use hand signals to alert vehicle drivers when stopping, changing lanes, or turning.

Avoid Riding at Night Or Be Prepared to Do So Correctly
Inexpensive (or affordable) bikes don’t usually come with strong enough lamps and reflectors to allow safe riding at night, so avoid it whenever possible. If you have to ride during darker hours, invest in decent clip on lights that can cut through fog, install reflectors, and wear bright reflective clothing to help avoid becoming a victim of a bicycle accident.

Cross Carefully and Watch Your Back
Nearly 40,000 reported bike accidents occur annually, resulting in almost 800 fatalities. Most of the latter involve motor vehicles, but there are simple solutions to avoid trouble altogether. Slow down and be alert, especially at cross stations or intersections. Be sure to watch your own back as well. If you’re concerned traffic is approaching your rear too quickly, move further to the right or walk your bike on the sidewalk until traffic slows. Implementing all the above suggestions should significantly reduce the risks of becoming a victim of a bicycle accident. But if you still need the assistance of a competent Michigan bicycle accident attorney, we’re just a call away.