Pacquiao Knocked Out by Marquez

We didn’t have cable to watch the live match of Pacquiao-Marquez 4 but we just relied on radio. We were on our way home and was at Mercury drugstore when my bro overheard from the store that Manny lost and got knocked out at 6th round. We’re shocked and of course we always wanted Manny to win the fight. Also read from my friend’s tweet that Manny lost.

It was only when we got home when we saw the delayed telecast of the match at GMA channel 7. I already know the result but I still wanted to see the action and the whole fight that ended Pacquiao.

I was screaming while watching on TV and could not believe my eyes. Marquez has a nice body form but Pacquaio is also mobile and quick but a sad turn of events happened.

The whole Philippines was shocked yesterday, Dec. 9th when our very own Manny Pacquiao was knocked out in the last few seconds of round 6 by Manuel Marquez. Their historical fight at Las Vegas Dec. 8th was unbelievable when Manny went down 1st at 3rd round while Marquez also went done in another round.

Here is end of 6th round where Manny Pacquaio was knocked out, almost lifeless. Arghhh.. thankfully he is ok now. 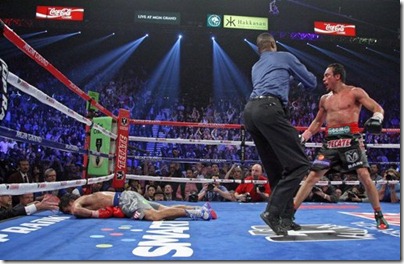 I admire Pacquaio for saying that he became over confident and he didn’t see the punch coming! Even if he lost he is still a champion for he has shown humility and accepts defeat. Too bad he’s still under contract and might have to go trainings and fight again soon. I hope he’ll just retire soon but with this kind of defeat, I ‘m sure he will not hang his gloves yet.

There’s no doubt that Pacquaio has brought so much pride in our country and he still deserves to be honored like a true hero!!

For us, you’re still a hero PACQUAIO! Not every fight you’ll win.