Every time I see this photo it's sad to remember when mom got sick just a couple weeks ago. It all started when mom went home from our shop one night with severe diarrhea. I already knew that it was alarming because my SIL told me she was going to the comfort room for more than 6 times or more already. Mom told me that she only ate 2 bobs of corn for breakfast and after that she started to have a diarrhea.

We rushed her to the nearby hospital but the ER was jampacked with lots of patients. It's good that her diarrhea and vomiting didn't acted while we are there because for sure it will be a mess. The doctor examined her after around 20 mins of waiting and told us that she needs to be admitted because of possible low fluid /electrolytes in her body.

We agreed and later on she was admitted where dextrose and other medicines are given to her. Mom stayed for 3 days and up until now she is still recuperating for her stomach feels like bloated and sour. 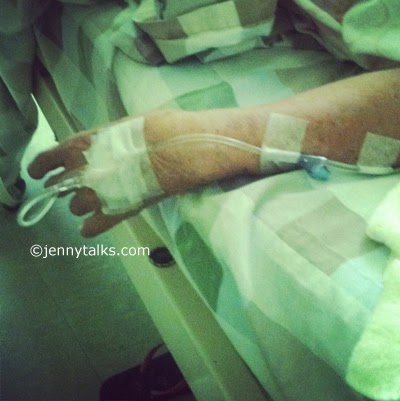 I'm praying that her health will be stable now. She's still on medication for 2 weeks for some stomach pains and after that she'll return to her doctor for follow up.
Posted by admin at 7:10 PM